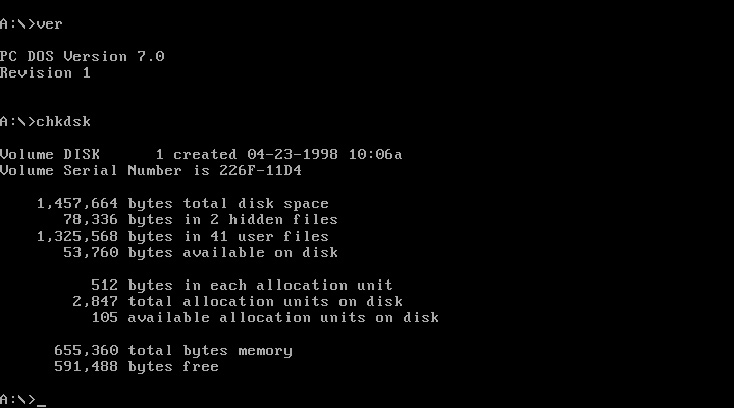 Which DOS Version Is The Least Memory Hungry?

I booted every single version of MS-DOS and IBM PC-DOS in VirtualBox using modified images from WinWorld, and ran the chkdsk command to see how much conventional memory was available. These have had their autoexec.bat and config.sys files either deleted or cleared, so there were no TSRs taking up memory in the background.

Note that results under other emulators and on real hardware may vary, but will be relatively the same and in the same ballpark. This is something that I hope to delve into in more detail in future updates to this page.

If you are looking for a “modern” DOS for old machines, with support for large drives and networking but a 3.x-4.x era memory footprint, go for IBM PC-DOS 2000. I run it on my IBM 5150 with 640K of RAM with no issues.

For anything 386-era and above, you may also want to consider the FreeDOS project.