Atari’s 2800 Story - How They Failed To Conquer Japan (Again)

The Atari 2800 was Atari’s attempt to bring their 2600 VCS games console to Japan in 1983. Having tried and failed to crack the Japanese market 10 years previously, and finding themselves up against the newly launched Nintendo Famicom, it was always going to be an uphill battle. But this quirky and interesting take on the Atari 2600 is fascinating in its own right, so let’s learn the story of how it came to be and take a closer look at the hardware and games! 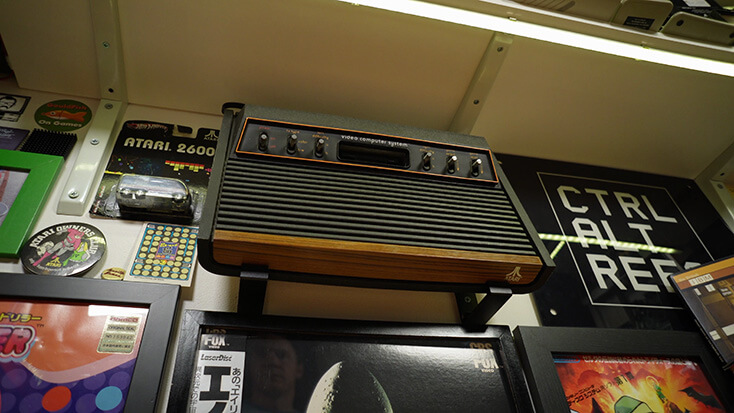 This console that I’ve been using as part of my set here for a while now is an Atari Video Computer System, VCS, or 2600, depending on who you ask. It’s the original Heavy Sixer model, in fact, manufactured for one year - 1977 - at Atari’s Sunnyvale, California factory - and that’s why it has pride of place.

Why’s it called a Heavy Sixer? Well, it’s heavy, and it has 6 switches on it. Later models only had 4.

This was quickly followed up with the far more common Light Sixer, which was a cost reduced version but for all intents and purposes identical to the untrained eye. 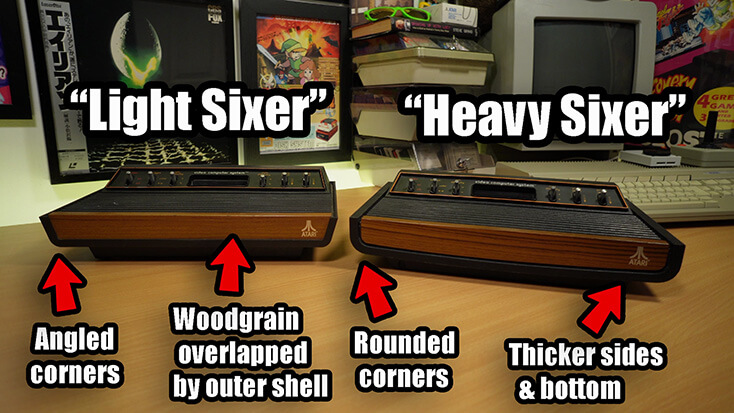 Can you spot the differences?

Anyway, this video isn’t about those… Although it kind of is - and more specifically, Atari’s failed attempt to conquer Japan in the early 80s and the very cool and unique version of the 2600 that they created to try to achieve this.

So here it is, the 2800, a super slick and futuristic take on Atari’s ageing console, designed specifically for the Japanese market and officially released there in 1983: 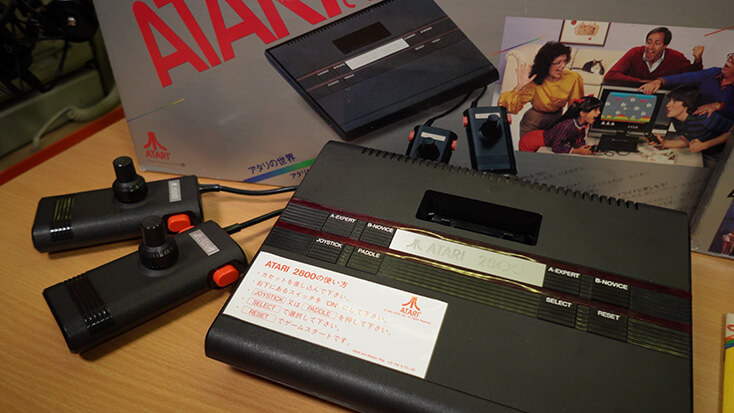 But first, lets go back a few years to 1980 and set the scene for its arrival.

Japanese home gaming giant Epoch - who would later become known for their own Cassette Vision and Super Cassette Vision consoles - were officially importing the VCS and trying to sell it in their home market with very little success.

OK, part of the reason was the high price of ¥56,300, but also in the land of sleek black plastics and chrome all that woodgrain stuff was kind of seen as old hat. 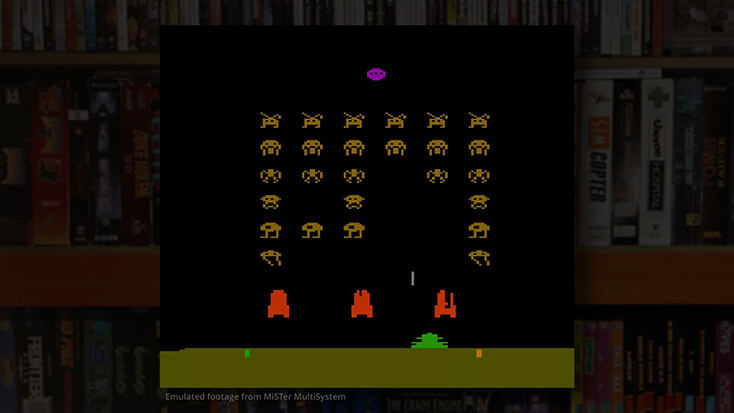 Epoch did have some success in prodding Atari to do the right thing - that same year they’d successfully facilitated the licensing of Space Invaders to the VCS, the first ever officially licensed arcade conversion on any system and a “killer app” for the console which very quickly went on to become the first videogame in history to sell over 1 million units. Unfortunately, this all happened outside of Japan and didn’t really benefit Epoch in any way so they released their own dedicated Space Invaders TV console and decided to cut ties with Atari.

Perhaps the most confusing part of all this is that Atari Japan had already officially been a thing way back in 1973 - years before consoles were even a consideration. 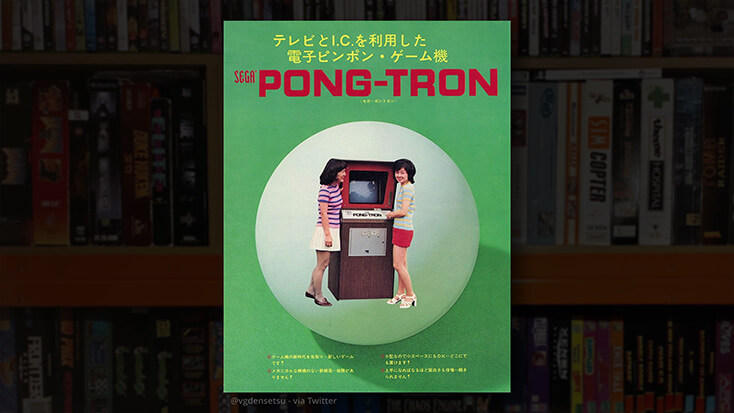 They’d managed to gain a foothold there manufacturing and distributing their arcade games but in true Atari fashion went bust, with what was left of the company - including their huge debts - being bought up by Japanese gaming giant Namco with this relationship leading to Atari distributing Namco’s arcade games - perhaps most famously Pac-Man - in the rest of the world.

But that’s a completely different division of the company and a story I should probably get into another time.

So with their arcade operation already being capably handled by Namco and their old console importer off doing their own thing Atari decided to have another official crack at Japan, founding Atari International Nippon in 1983 and launching the 2800 at a much more reasonable price of ¥24,800 or around $240 USD or £200 in today’s money.

The timing was also very smart, as Japan was seeing a bit of an American cultural invasion at the time, with big demand for American brands like Coca-Cola and McDonalds and big Hollywood films like E.T. and Raiders of the Lost Ark selling out at the box office. 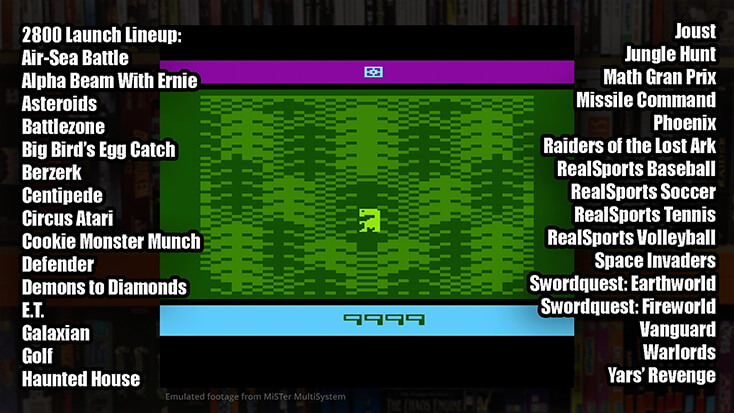 Of course, these hit movies were also licensed games on Atari’s VCS - by this point rebranded the 2600 - and so made perfect launch titles for the 2800 as part of a strong lineup of 31 games including arcade favourites that Japanese audiences would’ve already been familiar with - and yes, that includes Space Invaders even if it was long in the tooth by this point - in addition to edutainment, kids games, and some of Atari’s best selling first party releases.

Notably though this didn’t include Pac-Man, although it was briefly advertised and a very small number of apparently unreleased cartridges are in the hands of collectors. In fact the original 2800 box did feature Pac-Man but was quickly redesigned. There’s no official word on why this was, but some speculate that Namco weren’t happy with the quality of the 2600’s port, and unlike in America, had enough sway in their home country of Japan to prevent it being released. There’s also a theory that it could be the result of a complicated trademark dispute involving Tomy, who had the rights to sell Pac-Man toys. 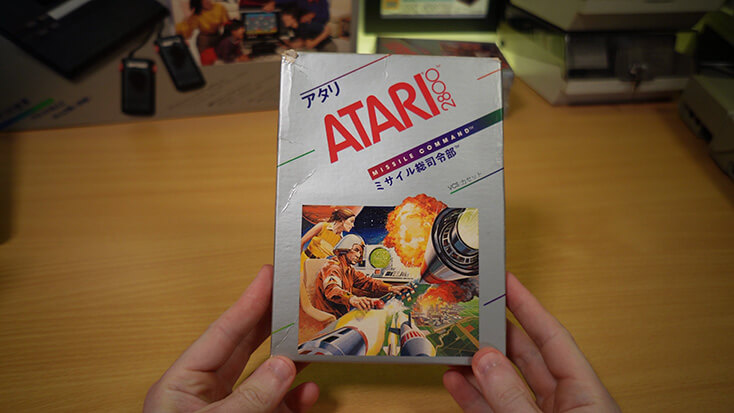 The 2800’s game cartridges were identical to the North American NTSC releases - labels and all - in fact they’re completely interchangeable. But Atari’s branding experts went with a variation of their 1980s silver theme for the boxes, with tweaks to try to make the design more appealing to the Japanese market in addition to localised manuals. 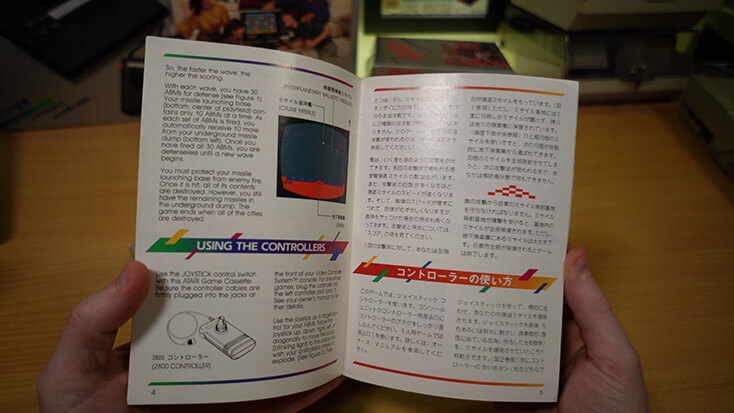 Incidentally these games are incredibly rare to find now, especially in the boxes, and these 4 and my odd collection of manuals are the sum total of the fruits of my saved searches that I’ve had set up on the Japanese auction sites for about the past 5 years.

Anyway, the lineup included both joystick and paddle games - and this is where one of the biggest innovations of the 2800’s hardware really becomes apparent and it’s my personal favourite feature. Rather than separate paddle controllers and joysticks as the 2600 had featured previously, the 2800 combined both features into one controller in an idea that was perhaps inspired by the Bally Astrocade that came before it, in this case using a push button system to select the appropriate mode on the console itself. 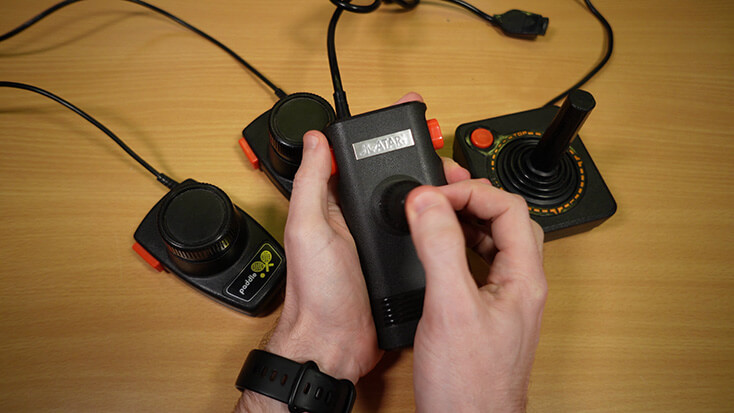 The controllers are genuinely a real joy to use, especially compared to Atari’s other offerings of the time, with a nice short throw on the joystick and a good tactile resistance to those 270 degree paddles. They’re quite a clever piece of engineering and I’ll show you what they look like inside shortly. 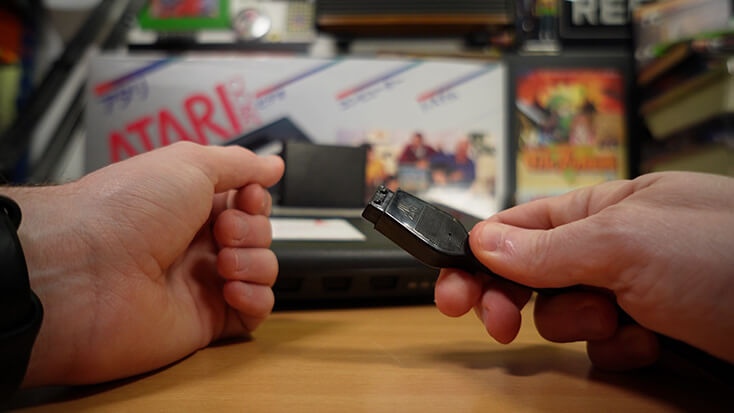 Because the 2800 used a one paddle per port setup rather than two sharing the same port like the 2600, it needed 4 controller ports. They’re standard 9-pin Atari ports - well, apart from these clips which are presumably to stop the controllers being pulled out - and they’re positioned in a much more sensible location on the front. So you could still play 4 player paddle games like the awesome Warlords but as far as I know there weren’t any 4 player joystick games as obviously none were released for the 2600 and the 2800 never got any exclusive releases - in fact I don’t even know if it would be technically possible.

As you can also see, the familiar chunky toggle switches from the 2600 have been converted into push buttons, with the black and white TV switch being moved to the bottom of the console.

Incidentally, Atari had previously worked on a prototype console called the 2700, and as you can see the case design and controllers are very similar and no doubt heavily influenced the 2800’s design. It’s a shame the 2800 didn’t get wireless controllers like this prototype but I guess they decided the technology was either too expensive or not quite there yet. 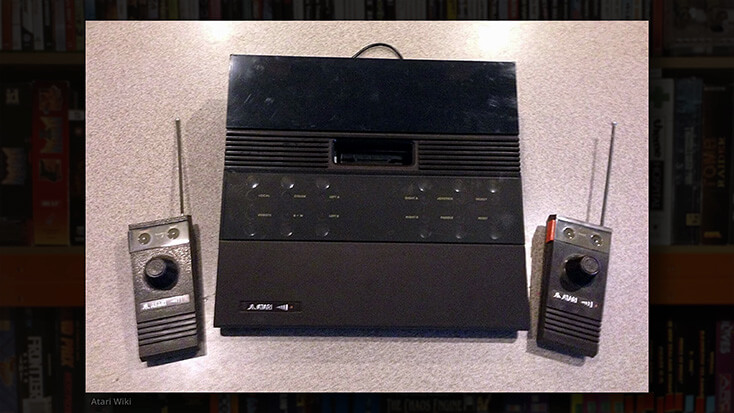 Now, this is a good chance to show you what’s inside as I previously installed a composite video mod rather hastily for an appearance on some YouTube channel or other - I’ll link that in the usual places. I really wanted to get the best out of this console so I wanted to install an Ultimate Atari Video mod from the Brewing Academy which adds a very high quality composite and s-video output.

It took a bit of trial and error as I obviously couldn’t find any information on how to wire it up for this very rare console but I’m really happy with the results and I’ve put a guide on my website. 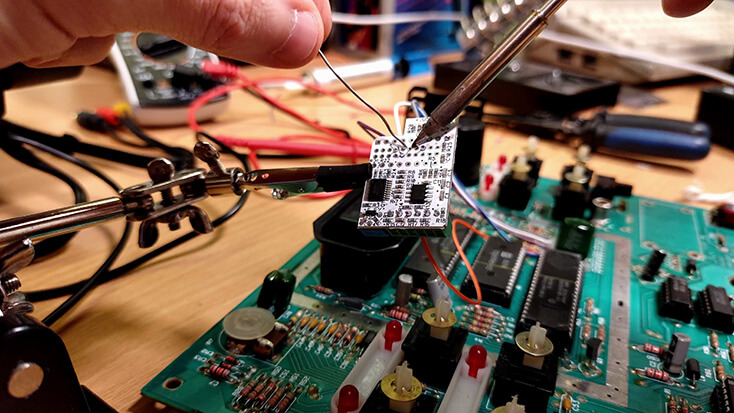 I didn’t wire up the s-video this time as I didn’t have any suitable connectors and to be honest the difference in video quality is pretty negligible on these - especially on a CRT - so it’s one less hole to drill in the case. But I did temporarily hook it up to show the difference if that’s something you’re potentially interested in.

I also took the opportunity to give these old controllers some maintenance - as you can see they use the same metal spring contacts as the classic Atari CX-40 joysticks and they were in great condition, but there’s also a potentiometer for the paddle. It’s just a case of spraying some contact cleaner in here and giving them a few twists, and now games like Super Breakout are far less twitchy and annoying than they were before. 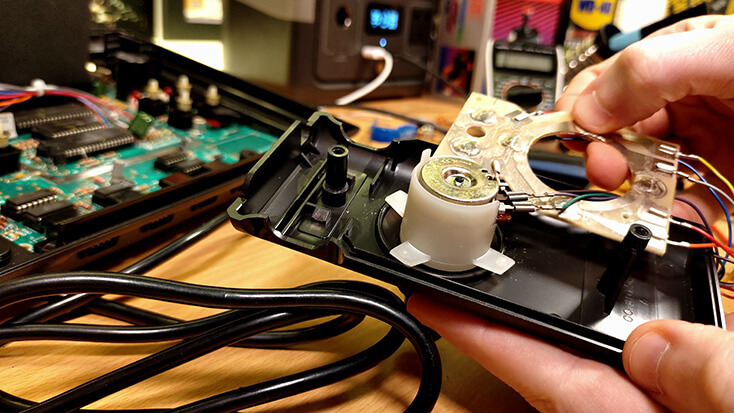 Circus Atari however… That game can get in the bin.

Well, it was a huge flop. It released pretty much alongside Nintendo’s brand new Famicom - which became the NES in the West - which not only had far superior sound and graphics but was also cheaper. I presume the fact that it was being sold by a Japanese brand like Nintendo - who had a long and illustrious gaming past and had spent the past few years making their mark on the arcade scene - probably helped seal the deal. 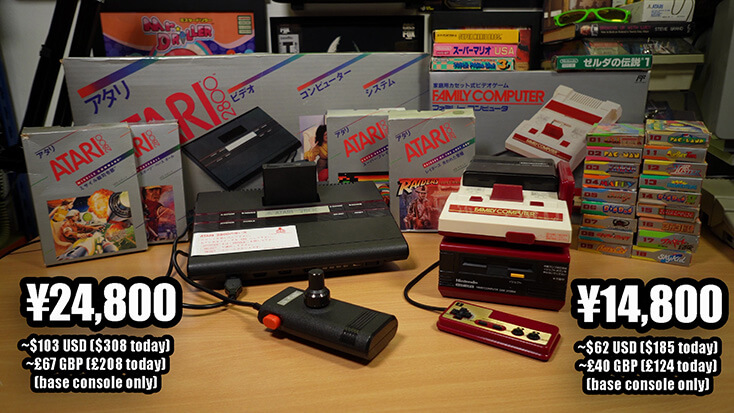 Sales figures aren’t available for the 2800 but by all accounts it was on the market for less than a year and no further games were released beyond that launch lineup, although an internal stock list from January 1984 does show that some further releases were planned. If the console’s scarcity on the second hand market these days is anything to go by, they really didn’t sell many at all.

However, the hardware did make its way back over to the US, where it was sold as the Video Arcade II in a long running collaboration between Atari and department store giant Sears, and descendants of its case design also lived on in the 5200 and 7800 consoles and of course the 2600jr. 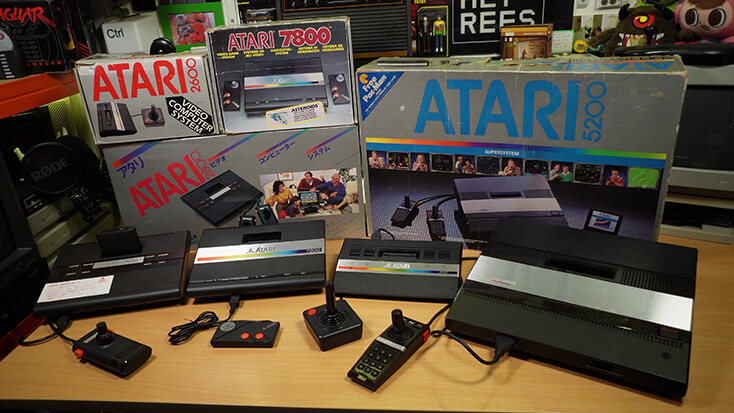 But that’s pretty much all I know about this particular piece of history, so thanks for taking the time to check out one of my favourite obscure consoles with me, and I’ll hopefully see you again soon.

If you liked this video please consider subscribing to ctrl.alt.rees on YouTube!